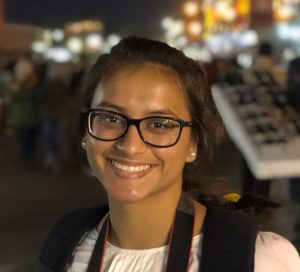 I grew up in a small town in Northern Wisconsin, where Hinduism was only practiced by one family: mine. As first generation immigrants from India, my parents’ religion was an integral part of their day-to-day lives, and they wished to pass their traditions, values, and beliefs to my older brother and I. However, in middle school, I realized that wearing mehendi during festival times, putting an auspicious tika on my forehead every morning, and having elaborate paintings of the Hindu gods and goddesses in my house seemed out of place to my friends, the majority of whom were raised in Christian households.

My friends would often talk about what they learned at Bible school that week, or what their Father talked about during mass, and I felt left out since I had not heard of the stories that they referenced. Worse, I began to feel self-conscious about my own religious practices, and after living in that town for fifteen years, I am saddened that I let my religious differences prevent me from fitting in with my peers.

When I moved to Madison, I became interested in learning more about the practices and traditions of other religions. Last year, I took a religious studies course that discussed the importance of religious and spiritual beliefs in health. We analyzed case studies where health care professionals neglected to recognize the role of non-medical factors in sickness. This not only resulted in deterioration of the patient’s health, but also sparked mistrust for the hospital staff. As a student on the pre-medical track, my critical takeaway from this course was that there is a simple way to engage patients’ religious beliefs: asking questions. This is especially important when treating terminally ill patients. Asking questions is important outside the hospital setting as well, helping one develop an open mind and promoting tolerance and coexistence.

Looking back at my time in Northern Wisconsin, I wish I felt comfortable asking my friends questions about their religious backgrounds; I could have expanded my very limited knowledge of Christianity and potentially begun my own interfaith dialogue with them. As a Center for Religion and Global Citizenry fellow this year, I hope to finally participate in interfaith dialogue that will not only teach me more about religions other than my own, but also create a more inclusive environment on our diverse campus.