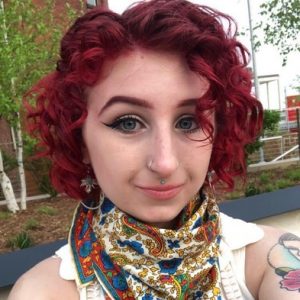 My high school parking lot has snowmobile trails leading to it from the farmlands outside of my hometown, so the farm kids can still make it to school if the roads don’t get plowed in time after a blizzard.  We have more churches than secular public spaces, and all religious texts aside from the Bible are placed in the “Mythology” section of the public library. Growing up in conservative, post-9/11 rural Wisconsin, we were explicitly told in 8th grade social studies that “Muslims are inherently hateful”, and were given no other information to challenge that notion.  Before learning how to navigate the internet, I considered the library to be my link to the outside world…until I learned that even the library acted as a filter to hide other perspectives from us, because the majority of the non-Christian religious texts in our library are written through a biased lens. I noticed this after reading all of them during my annual post-birthday existential crisis one year, and was left with more questions than answers; specifically, I was concerned about how the book about the Salem witch trials blamed the victims.  When you combine rural isolation, carefully censored reading material in the library, low levels of education, and small town traditions, you have a recipe for willful ignorance.

My dad was raised Catholic and my mom who was raised Protestant.  Neither are religious, and my brother and I were baptized Methodist, but I don’t really know what that means.  I started going to my friends’ Lutheran church in high school, since it was the “cool thing” to be in a Youth Group and I was a little curious.  I still felt like I wasn’t being told the entire truth and there were pieces left out. I just wasn’t sure what was missing, nor did I know what questions to ask to figure it out.

My aunt is a Catholic psychic and lives alone on a haunted farm.  She is a medium, and helps people cleans malicious spirits from their homes.  My brother and I spent summers at her place harassing toads in the pond and feeding blackberries to her chickens.  We also witnessed her medium work, and I even got to help on occasion. She showed me how Christianity and “New Age satanist garbage”, as the librarian in my hometown called it, worked together comfortably and complemented each other’s strengths and weaknesses.  After spending summers working with my aunt to communicate with spirits, and reading every pagan-bashing book in the library during the school year, I soon learned that there was even more information hidden from me than I previously believed. I always assumed that I would learn how to keep an open mind and search for the truth from the local library.  Instead, it turned out that my aunt’s eccentricity would play that role, thus preventing me from falling down the rabbit hole to religious extremism, like many others from my hometown. But in all seriousness, here we are.