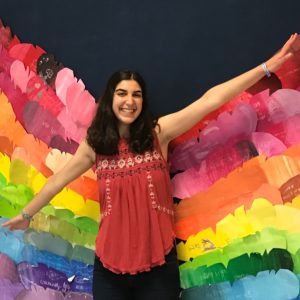 Entering Freshman year of high school, almost all of the people I knew were Jewish. For ten years of my life, I attended a Jewish day school with Jewish people and Jewish values. I took a Jewish studies and Jewish identity class every single day. I searched for my Judaism, my beliefs, and what made me feel connected to my faith. Up until that moment, I solely knew my small village and the Jewish people it consisted of.

Six years later, I have attended a Quinceañera, two confirmations, and the local Christkindlmarket. I danced for a Pakistani club, took photos of churches for my photography class, and held palm leaves on Palm Sunday. I now plan on traveling the globe to experience the many cultures and religions our world has to offer.

I have a different village from six years ago. It’s not bigger, or necessarily better, but it’s more diverse, and it strengthens my Jewish identity by exposing me to others’ beliefs. It was when I came to Lane Tech College Prep — the most diverse high school in all of Chicago — that I discovered this village. It was there that I became exposed to other cultures, religions, and found the biggest part of who I am — my Judaism. It’s ironic that I found my Jewish identity in a place surrounded by non-Jews considering that I was in a place filled with Jews ten years prior.

But in hindsight, it makes sense. For many people, I was the first Jew they had ever met. I was the first person they knew to skip classes for Rosh Hashanah, dress up on Fridays in preparation for Shabbat, and bring latkes for lunch during Hanukkah. I was constantly forced to explain myself and my actions. For many, this may have become a burden. But for me, it almost felt like a test of my Judaism. For the first time in my life, I wasn’t just going through the motions and listening to what my teachers were telling me to do. Why do I never write out the word G-d? Why do I fast on Yom Kippur? Why do I help my sister study for her Bat Mitzvah instead of doing my homework? I wasn’t only justifying my actions to others, but I was finally justifying them to myself. I was questioning what I truly believed in and I was reflecting on the traditions I truly wanted to take part in. I began to own my Judaism.

Public High School ended up opening an entirely new world for me: A world of interreligious dialogues and sharing of cultures, a world where I am different and unique, and a diverse world that constructs hard questions, but also hard answers. I feel as though I missed out for the first 14 years of my life. I’m trying to make up for lost time and continue diving headfirst into interreligious dialogue, knowing that my individuality can bring out the best in others and their individuality can bring out the best in me.