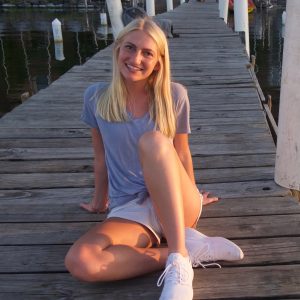 Growing up in an Israeli Jewish household in a conservative, suburban, and very Christian New Jersey town, I always felt like a little bit of an outlier. My sleepaway camp was the only place where the majority of my peers understood and related to my upbringing. It was my haven, and it was where I met my people. Kids at home thought it was bizarre that I just disappeared for the entire summer, but it always felt so natural for me to be surrounded by my people for those long awaited summers. I was never bullied for being Jewish, but I always felt a little different than my public school peers. There was always just that small, but persistent gap between us.

And then, before coming to college, I went on a gap year program to Israel that was led by my camp, and most of my camp friends also participated on the gap year. We lived, travelled, and learned together in the most historically rich place in the world. It was a year out of a dream- each day brought me so much happiness, adventure, and new experience. I was finally part of a Jewish majority, in a place where my upbringing aligned with the cultural norms. No day will ever compare to spending Yom Kippur in Jerusalem, and riding bikes with my best friends in the middle of the biggest highway in the country, because literally nobody was driving. Yom Hazikaron, the day mourning all fallen Jews of wars and the Holocaust, had never felt more special, because I knew that all of my peers felt the same sadness as I did. The next day, Yom Ha’Atzmaut, Israel’s independence day, brought a flood of excitement to the country and every street had street parties, with everyone dressed in blue and white. Shabbat on Fridays was for the first time not confined to my family’s home- it was an energy that radiated around the entire country as commerce and people slowed down for the upcoming 24 hours. I had never felt more at peace, and more whole, than living in Israel. All of the aspects of my childhood that I considered to be “weird”, all of the sudden made so much sense to me.

Coming back to America and attending college here at UW was an intense adjustment. Not only did I miss my life of constant self growth and adventure, but it was a completely different environment in regards to my sense of belonging. I felt that I was continuously meeting people who would tell me that I was the first Jew they had ever met, and that I was constantly explaining my personal story and background. Time after time, I almost felt that I was “justifying” my Judaism and sense of pride for my culture to others. Sometimes this seemed like a burden, but I would often catch myself beaming with excitement and pride as I talked about Judaism and my experiences in Israel to others. It was enriching to to share such a massive part of myself, but also to learn about how my life compared to my new peers’ lives as well. Overall, it solidified my love for my upbringing even more, inspired me to continue talking about my culture, and to learn about that of others.

Faith, religion, and culture are very different to every individual, but it will be these types of conversations that I learned to have in my freshman year of college that will create bridges between us and the other people that we share this Earth with. At the end of the day, coexistence is about the ability to be proud of your own culture, while also encouraging others to feel the same about theirs.