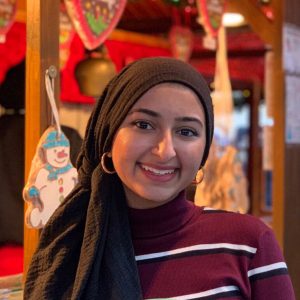 “Why are you wearing that thing on your head?” is a question that I have become accustomed to hearing throughout the past decade of my life. From friends to classmates to even a few family members, this question has followed me since the day that I decided to wear the hijab.

It was the first day of fifth grade, and while most kids were excited to see their friends after a long summer break, I was contemplating one of the biggest decisions of my life: putting on the hijab. My parents never forced me to start wearing a hijab, but I do remember them talking about the admiration they had for hijabi women and how they commended their strength and resilience. I, myself, was also drawn by the dedication hijabis had to their faith and how they proudly and openly displayed this to others. Eager to please both my parents and God, I made a hasty decision to commit to wearing the hijab without fully comprehending the ramifications for this action.

Growing up with an Indian mom and a Pakistani dad, I was no stranger to being the odd one out in my community. In my household, there was a fine line between culture and religion; oftentimes, these lines blurred, resulting in countless arguments about traditional versus religious practices. With my mom’s family being Hindu and my dad’s family being Muslim, I was already struggling with figuring out where I fit in with both sides and identifying the role that religion played in my life. This struggle was further exacerbated when I began wearing the hijab.

As a hijabi woman in post-9/11 society, I started to realize that wearing a hijab was more than a spiritual symbol of modesty; it had come to represent a political statement. Every time I stepped outside, I was constantly aware of the open stares I got from random people across the street. Although I never signed up for it, I became cognizant of the fact that wearing a hijab had made me a representative of Islam for many people. For some, my religion and my hijab symbolize being “un-American”, and due to this, I have continuously felt the need to defend myself and my faith from the misconceptions that have been strewn across the media. There were many moments where I considered taking off my hijab, especially after the increase of Islamophobia within the recent years. However, I knew that I couldn’t succumb to the perceptions of others and let them change my beliefs.

It has taken me many years to realize that I am more than just the piece of cloth wrapped around my head. Wearing a hijab does not make me any less American. If anything, I believe that it emphasizes the true essence of being an American: having the freedom to stand up for what you believe in and live your life however you’d like. My hijab liberates me, for it allows me to be myself and break down the conventional standards of beauty. It serves as a reminder of my devotion to God and my purpose in life. However, that’s not to say that I haven’t struggled tremendously along the way. To this day, I am constantly working towards being an authentic version of myself while I navigate the world with this “thing on my head”, and although the journey seems endless, I am looking forward to what the future holds for me.

2 thoughts on “More Than Just a Scarf—Niha Shamsi ”