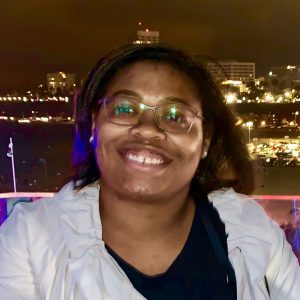 A New Year signals fireworks, resolutions, and changes. As Fellows we are tasked with continuing our work from the fall semester while choosing a theme for the Center’s events for the Spring Semester.

As I reflect on this semester and prepare to enter into a new decade, I have taken time to reflect on the last decade and make plans for the next one. While scrolling through Twitter on New Years Eve, I noticed #Roaring20s was trending. Like many American secondary students, I spent a lot of time in high school English, immersed in The Great Gatsby and other famous literary pieces from this time period, but I am equally reminded of the themes of racism and oppression present in the history lessons of the twenties. Personally, I am not interested in experiencing the Tulsa Race Riot or the racially restrictive covenants upheld in Corrigan v. Buckley. The willingness of people to so easily recall this phrase dismisses the terrible reality of life during that time for people of various identities. I think it is important to understand that we must make the 2020s much different from the 1920s, and ultimately, interfaith relations have an important role in this effort in our community.

Superficially, it is easy to compare religion and race: one is an identity we can see, and one is an identity we cannot see. In other words, race is typically on the outside, whilst religion is traditionally considered internal; race is biological while religion is often a matter of choice. People seem to think race and religion are separate entities; this bias fuels the question after any race-related incident: why does this have to be a race problem? Historically, I do not believe the identities were separate. In fact, white supremacy cut so deep, that it followed people to the grave: African-American Christians could not worship in the same pews as white Christians, let alone be buried in the same church burial grounds. This is one example, but I imagine we can look within various faith communities and identify times when racial differences inspired differing access to religious expression.

The idea that race and faith are purely separate identities is ignorant of the past and of the present climate in America. In other words, they want to remember the 20’s for good, but not the bad and the ugly. Thus, those who value religious liberty and equality must send a strong and equally unified message that racial and religious injustice is wrong. If we believe in the idea of religious pluralism, the attitude or policy regarding the diversity of religious belief systems co-existing in society, we must also consider tackling the race issue as interfaith fellows.

As a cohort, we have to determine whether we will allow our campus to continue patterns of injustice set forth in the 1920s. The homecoming video, controversial climate change protest, and controversy over the removal of the Multicultural Learning Community House Fellow are a few examples of the reality that race relations affect other aspects of our lives on campus. I find it imperative that our cohort support change in our community in the face of continued challenges, if we truly believe in religious pluralism in 2020 and beyond.

While there are plenty of questionable hashtags, I’m simply unwilling to declare this decade as the #Roaring20s. I hope we consider working as a cohort to ensure this next decade supports change.