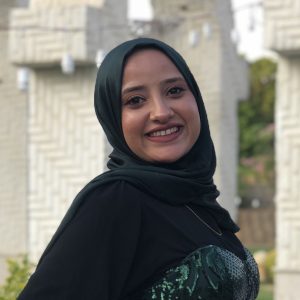 Growing up, I’ve had the experience of living both as part of a majority religious group, and later as a minority religious group. Living my early life in Cairo, I had many Christian friends in school. We hung out, visited each other, and did homework together. However, we never really talked much about interfaith topics. I never went to church with them, except for weddings or funerals. As much as I valued our friendships, I honestly did not make the effort to understand our differences; as a member of the privileged majority religious group in Egypt, these things did not seem to affect me personally.

Not until 2011, when I participated with approximately a million other Egyptians in the uprisings against the government demanding social justice and freedom; then I was able to connect with people from other religious and social backgrounds differently. In this beautiful moment, when Muslims started praying and Christians protected them by creating human chains around them, I realized that our values overlap to a great extent. We can have different theologies, but our very nature is the same. I was fascinated by how a simple recognition of our shared values around freedom and social justice brought us together to topple a regime that lasted for over 30 years. Since then, I’ve taken it upon myself to practice Rumi’s quote, “Your task is not to seek for love, but merely to seek and find all the barriers within yourself that you have built against it.”

After the uprisings, I moved to the United States for college. I became part of the minority group, which changed my perspective on many things. For example, when I lived in DC, there was not a Muslim prayer space downtown. A church used to offer its space for Muslims to pray Jumma’ah congregation on Fridays. This scene, of the Muslim Imam standing by the church altar preaching Islamic teachings—Muslims scattered among the church benches—has always touched my heart. It made it clear to me that our role is to support each other in our quest for truth regardless of what “truth” means for us. A few weeks later, I was invited by my mother’s friend to volunteer at that same church, serving our neighbors, some of whom were also Muslim. This experience left a great impact on my understanding of shared values across religious difference.

Soon after moving to Madison for my PhD program, the New Zealand shooting happened. I was grieving, knowing that these people were killed in a context very similar to that of me and my friends here in the United States. I went to the mosque to find solace, and there I found an amazing group of Jewish women standing in solidarity with Muslims. I was very touched by the gesture, knowing that the event did not go unseen by those from other faiths.

It requires more effort to see these shared values when you are part of the privileged groups. But for me, having lived in both contexts, it was very clear. In one of our interfaith meetings, we talked about our values and how we share many of them, despite coming from different religious (and no religious) backgrounds. I am excited to see how these shared values of the group could translate into action this semester.