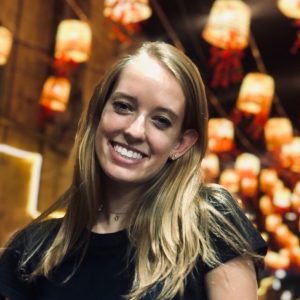 I thoroughly enjoyed my experience last semester being a fellow at the Center for Religion and Global Citizenry.  One of the most memorable experiences I’ve had so far was visiting Hillel, the Jewish student center on campus, and having a group discussion with the Rabbi and other Jewish students.  We had the opportunity to learn about the holidays of Rosh Hashanah, Yom Kippur, and Sukkot, as well as go in the Sukkah, or temporary hut that is set up outside during the Sukkot festival.  I learned that oftentimes Jewish people will go outside and pray or eat in the Sukkah during this holiday season. As someone who was raised in the Christian tradition, I’ve never experienced something like this and I saw this as a unique aspect of the Jewish faith that many people probably aren’t aware of.

The next weekend, I was visiting a friend of mine who goes to the University of Illinois  for the Wisconsin/Illinois football game. While I was there, I saw a man riding a bicycle on the street with a structure similar to a tall tent with one side open attached to the back of his bicycle.  On the side, it said “Mobile Sukkah.” It seemed like the idea behind the mobile Sukkah was so people could still partake in the Jewish holiday even if they didn’t have the resources or space to build their own—which is especially helpful for college students. If I hadn’t had the opportunity to learn about Sukkot from my Jewish co-fellows, I probably would have just thought the man riding the bike had put a tent on the back for driving people around. This experience led me to think about the many other religious traditions that happen in the community around me that I don’t realize.

This is the main reason I chose to join the CRGC fellowship – I wanted to learn more about the religious beliefs and traditions of other students on campus. As a political science major I also enjoy learning about human behavior and what drives people’s actions and beliefs.  One of the things I’ve found especially interesting when it comes to learning about other faiths is how different they are from the Christian tradition I grew up in. Often our faith background shapes some, if not a large part of our lives. For example, being born into any particular faith can determine things like what you eat, what you do on the weekends, or where you travel.  I think it’s important to be aware of identities that are very meaningful to a large group of people and also very interesting to me personally.

Another memorable experience I had during the first semester was when everybody brought in an item that is from their religious or secular background and talked about it with the group.  Most people brought in something small but still central to their faith and explained what it is, how it’s used, and what it means to them. I thought this was a great way to initially learn a little bit about different faiths or traditions because everybody brought something different to talk about, and we were able to get a surface level understanding as well as some background information on a wide range of beliefs.

Both of these experiences taught me more than I had ever known about non-Christian belief systems, and I’m very excited to continue learning this next semester—hopefully having more opportunities to hear the experiences of other fellows.