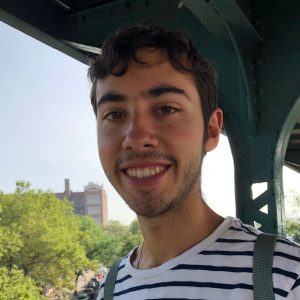 Our recent holy site visit to the AHA Shiva Vishnu temple was one of the most informative and impactful experiences I’ve had as an Interfaith Fellow so far. I came away from the visit with a heightened awareness about how diverse the world of Hinduism is, which to me, is a testament to the fact that spirituality transcends sectarian boundaries.

Thanks to Asha, one of our Fellows, we had the opportunity to explore the temple and learn from one of the worshippers. It was remarkable to be in that setting–with its vibrant color tones and elaborate statues of deities–only a few miles away from campus. The sense of immersion I had upon entering the space speaks to the cultural richness of the Indian religious traditions.

I was particularly interested to learn about the way that personal choice factors into the category of practices known as Hinduism. It’s important to understand how western colonial influences have shaped our perception of Asian religion, which cannot be fully understood or appreciated by simply trying to map on Abrahamic religious concepts. There is much to admire in the simple idea that a Hindu is a seeker, someone who is aspiring to attain enlightenment by pursuing a path that feels personally right for them. I found myself eager to learn more as our speaker gave us some historical context for Hindu philosophical ideas.

Much interfaith conversation tends to be dominated by Abrahamic religious perspectives, but traditions outside this sphere provide so much depth to our dialogues by bringing very different ontologies to the table. Finding commonalities across scriptures is fairly easy to accomplish, but being able to appreciate how spirituality has developed differently in disparate parts of the world gives us an altogether fuller understanding of the human condition. We often take the idea of religion for granted, but the very concept is itself a product of a certain way of seeing the world.

For me, as a Jew, it is interesting to reflect on how intertwined devotional traditions and broader cultural and geographic identities are. Classifying Indian spiritual devotees as Hindus has had as much to do with their location as it has their beliefs. Though Judaism in modern times is diasporic, our own tradition holds that the ancient Israelites were a tribal group who were the recipients of revelation. Modern Jews have maintained and developed rituals and practices over the course of two thousand years. It’s fascinating to learn about Indian traditions, which grew out of a deep metaphysical curiosity but were somewhat less based on the necessity of shared belief. This gives me a keener sense for how the world’s spiritual traditions have evolved in their various manifestations. I find it compelling to imagine the debates that took place between Buddhists, Jains, and other Indian devotees over centuries on the subcontinent. The strong philosophical foundation of the Indian religious traditions is evidence for the universality of mysticism–the spiritual experience is the human experience, and it is inherently subjective.