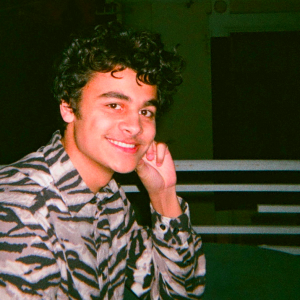 The setting sun had given the sky a hazy, amber glow, and we set out for the Sri Kalikamba temple on the village’s outskirts. Although low to the ground and constructed with a thatch roof, the house of worship was immaculately maintained. Preparing for the ceremony (or puja) a woman arrived with a chicken and a blade and spilled its blood across an altar outside the temple with a well-practiced swipe.

The priest emerged and beckoned us inside to commence the ceremony. One by one, he lit a series of candles, illuminating a large shrine that had been erected in the center of the space. The temple had been devoted to Kali, the Hindu goddess of destruction and rebirth, who is worshipped by my family. The goddess’s appearance was remarkable. She sat on an ornate throne, dressed in a silk-like garment, adorned with floral garlands and her face painted red.

I had just completed my first semester of college and was visiting India with my mother. While our primary destination was the metropolis of Bangalore, we had traveled to our family’s ancestral home—the small desert village of Yedavani.

The increasingly dark sky emphasized the flickering candles, which cast striking shadows on the face of the goddess. The priest proceeded to strike a large gong—the reverberations creating a claustrophobic sensation inside the space. As the priest moved a candle around the face of Kali in a circular motion, illuminating her large eyes and crimson features, I felt as though I was locked in a hypnotic trance. The impenetrable eyes of the deity stared into mine with a paralyzing gaze. At first, I reacted to the sensation with panic and anxiety. After all, the practice contrasted sharply from my own construction of what religion was “supposed to look like.” Familiar imagery of churchgoers dressed in their Sunday best, a choir and organ accompanist, and the nativity scene flashed through my mind.

As I continued to engage with the ceremony, though, my initial hesitation suddenly dissipated. I realized that I had already witnessed these practices first hand, although in a different form. Parallels between my world and this one became apparent. While the Hindu ceremony had been predicated on the sacrifice of the chicken, I noted that Christianity is predicated on the self-sacrifice of Jesus Christ. While the Hindu priest had placed Tilak on my forehead, the Catholic priest’s placement of Chrism oil on my forehead was no different.

The practices I partook in were not strange, nor different. They simply were. In India, religion is not merely a component of one’s weekly schedule, as it was for myself. Instead, it is a way of life. In fact, religion and life are not separate entities. In this rural village, they were one and the same. I went on to remind myself of the fact that my own ancestors had stood in the same spot as I, worshipping, for thousands of years.

I returned to Minnesota the following Sunday, and I attended church for the first time in over a year. I listened earnestly to the sermon—something I’d never done before. A sense of guilt overcame me, as it dawned on me that I had long neglected my Catholic upbringing. Had a family member from Yedavani attended the mass, they surely would have reacted to this religious ritual with the same awe and admiration I had expressed for their practices. This realization instilled in me a renewed passion for religion in ways I am still attempting to understand.

While my identity as a Catholic has not differed, there is added nuance to my spirituality after witnessing the indescribable power of religion firsthand. With the CRGC this year, I am looking forward to further debriefing our experiences, analyzing cross-cultural and religious interactions such as this one, and—in the words of interfaith leader Eboo Patel—exploring the “ineffable dimensions of the divine.”

Have you attended a religious service other than the one you practice? If so, what were your takeaways from the experience?