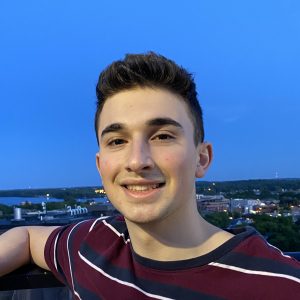 Growing up in Middleton, WI I was always in both the ethnic and religious minority. My peers and friends were all Christians practicing to various degrees, but nevertheless were still identifying themselves as Christian. I, on the other hand was a Sunni Muslim which made me feel as if I didn’t fit in with the rest of the group. This feeling of being “different” made me insecure about my religion and my identity as a whole. When my parents would call me out of school for the religious holiday Eid, I would just tell my friends that I was sick that day, or when I would be at a friends house and it was time for me to pray, I would make a random excuse as to why I had to leave. This continued throughout elementary school and a little bit into middle school.

However, as I grew older and began learning more about my religion, my faith only strengthened. As I learned about Islam and began applying its teachings in my day-to-day life, I began to feel better about who I was. I could slowly feel the insecurity of my uniqueness fade away with every prayer. I finally began to feel proud about being Muslim. I stopped making excuses as to why I had to step aside and began telling my friends that I had 5 daily prayers that I must attend to. I told my friends about the holidays I celebrate and how these were different from theirs. I answered my friends’ questions about my religion and cleared up any misconceptions they saw on mainstream media. As I became more open about my religious identity, I felt prouder and my faith only got stronger.

My love for my religion is what drove me to join the CRGC. The main reason I used to be insecure about my religion was the mainstream media’s depiction of it. They made it seem as if all Muslims were terrorists and that all we want is bloodshed and violence. When in reality, and in my own experience, Islam is all about peace, heavily scrutinizing violence and bloodshed to the point that it condemns anyone who participates in actions that harm others.

I wanted to join the CRGC so I can help clear up those misconceptions and help lead society one step closer toward global peace and harmony. People from all religions and no religion need to come together and teach one another about their traditions and worldviews so that we can all accept and respect each other. In the end we are all humans trying to figure out our purpose on this planet and who are we to judge each other when we don’t even know the complete answer ourselves?

Have you ever felt insecure about your religion or knew anyone that was? If so, what did you do to get rid of the insecurity of your own religious identity or someone else’s?

3 thoughts on “Life Among Others – Osama Fattouh”