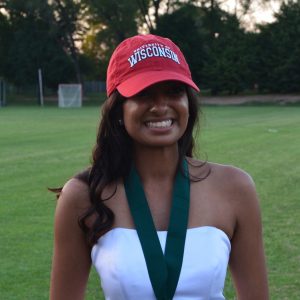 I still continue to search for the perfect balance between my Hindu, Jain and Indian background and the American culture I have grown up in. Growing up consisted of a constant battle between these identities: I could never be too Indian for my friends at school or other westernized environments and I could never show too many American ideals around my Indian family and friends.

This divide is especially pronounced in my relationship with my parents. As immigrants who came here in their late 20s, they don’t understand the Americanized culture that I face. For them, media wasn’t so prevalent, the dating culture was practically nonexistent and they were accustomed to being the majority race in their community where Hindu and Jain households fell on the conservative side of the spectrum. This was a life much different than the one I live, a situation bound to cause some friction.

The biggest obstacle we faced was when I started dating my current boyfriend, Adam, who is white European and of Christian faith. It is taboo to bring a significant other around close family and friends at an age when marriage isn’t on the table, especially with arranged marriages being such a large tradition in Hindu culture. When I told my parents that we were dating, right away they told me, “This doesn’t need to be anything serious, you’re young, so school should be your priority.” However they let me make my own decision. Yet family is such a key pillar in Hinduism, so my parents had strong opinions about our relationship. They wanted me to spend less time with him than I had been asking for, didn’t want him around extended family and friends (because it wasn’t marriage-level yet), and they constantly questioned Adam’s familial dynamic and how it would work with our own.

Rather than fight, I learned to start conversing with them about my beliefs and values, something I implemented in other areas that had felt confrontational in the past. We didn’t have to become defensive and frustrated in the face of disagreement, but could advocate for our own beliefs and learn from each other. Now as a third year college student, living on my own, I have seen a positive change in the way they respond to my decisions and beliefs. The differences that led to negative fights and alienation now became a path to more open and inviting mindsets.

I noticed this change more significantly in our personal conversations after having broader talks about American culture and the political environment. Growing up in St. Louis close to Ferguson, MO, there were many debates about race, police brutality, and the resulting protests and riots. Over the years, I have noticed these conversations going from hostile to intellectual, focusing on understanding each other’s points of view, and reminding one another how our childhood environments have shaped our points of view. I found this openness to disagreement resonating in conversations about the way I live my own life in my American educational environment, and through my relationships and broader social life.

Though I continue to find myself unconsciously searching for that “perfect” balance, I have come to the realization time and again that maybe it isn’t about finding the perfect balance, but more about embracing both aspects of my background, finding what coincides with my personal values and goals, and being willing to stand up for my point of view while being open to others.

Have you found yourself negotiating your identity and/or experiences with your parents as a result of the differences in both your parents’ and your own religious and cultural upbringing? If so, what was it and have you found a solution or “balance”?