The story of the “conflict thesis” between science and religion—the notion of perennial conflict or warfare between the two—is part of our modern self-understanding. As the story goes, John William Draper (1811–1882) and Andrew Dickson White (1832–1918) constructed dramatic narratives in the nineteenth century that cast religion as the relentless enemy of scientific progress. And yet, despite its resilience in popular culture, historians today have largely debunked the conflict thesis. Unravelling its origins, James Ungureanu argues that Draper and White actually hoped their narratives would preserve religious belief. For them, science was ultimately a scapegoat for a much larger and more important argument dating back to the Protestant Reformation, where one theological tradition was pitted against another—a more progressive, liberal, and diffusive Christianity against a more traditional, conservative, and orthodox Christianity. By the mid-nineteenth century, narratives of conflict between “science and religion” were largely deployed between contending theological schools of thought. However, these narratives were later appropriated by secularists, freethinkers, and atheists as weapons against all religion. By revisiting its origins, development, and popularization, Ungureanu ultimately reveals that the “conflict thesis” was just one of the many unintended consequences of the Protestant Reformation. 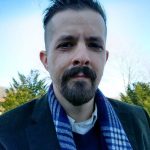 James Ungureanu is Historian in Residence in the George L. Mosse Program in History at UW-Madison. He is also an Honorary Research Fellow at the Institute for Advanced Studies in the Humanities (IASH) at the University of Queensland, where he earned his PhD in Religious Studies. He has a double BA in philosophy and religious studies from the University of California-Davis, and an MA in the History of Christianity from Trinity Evangelical Divinity School. As an intellectual historian, James’s research interests range over the history of Christian thought, from antiquity to the present. He has published articles in such journals as Notes and Records of the Royal Society of the History of Science, Notes and Queries, Zygon, Science & Christian Belief, Church History, Historical Studies in the Natural Sciences, and Fides et Historia. Science, Religion, and the Protestant Tradition: Retracing the Origins of Conflict was published in 2019 by the University of Pittsburg Press.