Following a long association with nationalism and militarism, culminating in widespread complicity with the Nazi regime, Protestant churches in post-Nazi West Germany became sites of vibrant democratic reform movements by the 1960s. This talk explores the interconnections of political and religious change in postwar West Germany, conceptualizing the transformation of Protestant politics as an interpretive process. Against the backdrop of German division and the Cold War, a cohort of Protestant pastors and lay intellectuals reread the ambiguous record of their churches under National Socialism as one of full-blown resistance. They in turn argued for a new conception of democracy rooted in Protestant values. My talk will highlight Protestant campaigns for the liberalization of family and education law in 1950s West Germany as a key moment in this transformation. 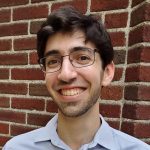 Brandon Bloch is Assistant Professor of History at the University of Wisconsin-Madison. He completed his PhD in 2018 at Harvard University and taught at Harvard for two years as College Fellow in Modern European History before beginning his current position. His research and teaching foreground questions of democracy, citizenship, and human rights in modern Germany and Europe. He is currently completing a book manuscript titled Reinventing Protestant Germany: Religion, Nation, and Democracy after Nazism, which explores the connections between political transformations in the Protestant churches and the formation of democracy in post-1945 West Germany. His writing on human rights in postwar Europe and on modern German intellectual history has appeared in The Journal of Modern History, Modern Intellectual History, Boston Review, and elsewhere.