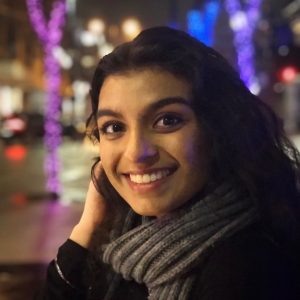 Being a part of the Sikh diaspora is something I find difficult to put into words at times because most of my life has been dominated by my desi appearance. I didn’t mind it as a child since I was one of the few desi students at my small K-8 school. But even then, I understood that “being Indian” was not a monolith and among the desi minority, I was religiously minoritized.

I started to care about how my identity was perceived in sophomore year of high school, especially during our few lessons on Indian History in AP World History. My AP World teacher was pivotal in my growth as a student and as a person. He was the first and only teacher I have had who knew about Sikhism (without me having to explain it). It was my favorite class, but it almost lost that status because of our textbook.

During our unit on India, we were assigned to read about Indian religions. Unlike my knowledgeable teacher, our textbook fell short of the nuance for India that it had been able to provide for other parts of the world. The textbook had explicitly written that Sikhism was a “syncretic religion,” essentially a mixture of Hinduism and Islam. This was a disappointment; the idea is not entirely wrong, but is not the first or most important thing about Sikhism. I was determined that day to call him out, since most of his lectures had been based on the content from our chapters. However, by the time we met at the end of the day, he had already been corrected by my cousin, who was in my teacher’s 3rd hour AP World. I was relieved because as ready as I had prepared myself to politely but effectively correct my teacher, I was worried about how many people’s eyes would roll. I don’t know how many people actually cared about the clarification my teacher had made regarding the textbook and its shallow summarization of Sikhism, but for me it meant a lot because it showed that my teacher actually cared enough to do his due diligence to make me feel seen.

Here’s another consideration of accuracy: As a Sikh (ਸਿਖ student, learner), I believe the best way to practice my faith is to stay true to the fundamental values of Ek Onkar (ੴ there is Oneness), and the ‘Three Pillars,’ which are Naam Japna (ਨਾਮ ਜਪਣਾ meditate on the name of Waheguru), Kirat Karni (ਿਕਰਤ ਕਰਨੀ work honestly) and Vand Ke Chakna (ਵੰਡ ਕੇ ਛਕਨਾ share with others). While there aren’t any denominations in Sikhism, practices of Sikhi lay on a spectrum, influenced by one’s culture and how one defines “accuracy” for their lifestyle. Yet, all Sikhs will agree that Ek Onkar and ‘Three Pillars’ are fundamental values of Sikhi. Accuracy matters when learning to understand the essence of one’s beliefs but ultimately, it should serve as a tool to promote unity over division.

What is the role of accuracy in how you practice faith and structure your lifestyle? When do the details matter?

3 thoughts on “The Value of Relative Accuracy – Simran Kaur Sandhu”