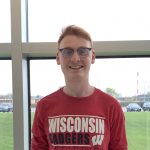 Jewish people have many different garments that can denote their faith. One of these garments is a yarmulke or, in Hebrew, a kippah, which means “dome”. Wearing my kippah is something very special to me and has been an important part of my spiritual and religious journey here at UW-Madison.

Growing up in a largely Jewish suburb of Chicago where most people were either modern Orthodox, like myself, or affiliated with Judaism in other ways, wearing my kippah was normal and embraced. Every morning when I would wake up, putting on my kippah was part of my routine, something that I never forgot to do. This routine was something that changed when I arrived at UW-Madison. When I first came here, I experienced a little bit of a culture shock, meeting many people who had never met a Jew in their entire life. And in some instances, I was worried that this unintentional ignorance would lead to anti-Semitism or other forms of hate against Jews. Therefore, I decided to not wear my kippah because I did not want myself to stand out and possibly be a victim of anti-Semitism.

As my first semester continued, I learned more about Jewish life on campus and how religion in general is viewed at UW-Madison. After my first semester concluded, my family and I ventured to Israel over winter break to visit my siblings who live there. At the time of our visit in Israel, we were also celebrating Hanukkah, which is always fun in Israel. On the seventh night of Hanukkah, my family joined some relatives to celebrate. That next morning, I woke up in Tel Aviv and heard that five Hasidic men, who were celebrating Hanukkah in their home in Monsey, New York, were the victims of an anti-Semitic attack (four of them were stabbed and one of them was murdered). Obviously, this event was extremely tragic and catastrophic, though hate crimes are unfortunately common here and around the world. However, this specific anti-Semitic incident stood out to me. The unequivocal starkness was due to the fact that even in the privacy of their homes, Jews cannot practice the ancient religious and cultural traditions without being the victims of hate. This very fact lead me to believe that in order to combat the rampant anti-Semitism that consistently permeates our country, we need to display our Jewish culture and religion even more. This belief was one that had shifted or been altered since I began my time at UW-Madison. When I began my time at UW-Madison, I worried that donning my kippah would provoke anti-Semitism in certain communities that I associate myself with, or even just on the streets of Madison. Ever since the Hanukkah attack in Monsey, I have come to the understanding that anti-Semitism is not just something that can be eradicated or lowered through the utilization of words; rather, it is something that we need to combat with actions. Donning my kippah is now an action that I perform to help combat anti-Semitism — to constantly reinforce the fact that Jews are here and here to stay.

Everyday when I wear my kippah, I am reminded of what it means to be a Jew. I am reminded of the toils that my ancestors have suffered throughout Jewish history. I am reminded that I have a purpose to live Jewishly and continue the Jewish tradition even in spite of all of the Jewish hate. Wearing my kippah is a way to center myself and reinforce that my religion is always with me. My kippah, a simple dome-shaped article of clothing, is a reminder of who I am and what runs through my veins, my Jewish identity.

For those of you who are religious, are there any ways you visibly show your religious identity? What has been your experience like, showing up as religious (or not religious) on campus?

1 thought on “Why I Wear My Kippah on Campus: Jewish and Proud – Aitan Maeir”