Buddhist art from Tibet and Nepal has become widely known through display in museums and exhibitions. Images of esoteric deities, maṇḍalas and ritual objects, previously seen only by practitioners, have been exposed to the public’s gaze. Tibetan art has attracted particular attention and has been idealized as ‘meditational’ and ‘enlightenment art’. Although for the past two decades scholars have exposed such western fantasies about Buddhist art, these notions are still prevalent, especially in popular books. The maṇḍala is a case in point. Mainly used in tantric initiation rituals in the past as a surface whereon to invoke divinities, it has more recently been described too uniformly as a ‘tool for meditation’ or ‘meditational diagram’. It has entered still other contexts – being interpreted, for example, by psychologists and art therapists – and correspondingly has taken on new meanings. In this talk, I will provide an overview of the contemporary use of maṇḍalas as aids to and objects of meditation, contrasting this usage with traditional functions of maṇḍalas in Buddhist tantric ritual. 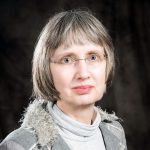 Gudrun Bühnemann is a Professor in the Department of Asian Languages and Cultures at the University of Wisconsin-Madison and a Faculty Affiliate of the Religious Studies Program. She has published extensively on South Asian iconography and ritual. Her recent books include, Śākyamuni’s Return Journey to Lumbinī (lumbinīyātrā): A Study of a Popular Theme in Newar Buddhist Art and Literature (Lumbini International Research Institute, 2015) and The Iconography of Hindu Tantric Deities (First Indian edition, revised, as a single volume, Aditya Prakashan, 2016).