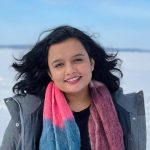 I grew up in Nashik, India in a Hindu household. Growing up in a complex, multicultural nation, I was exposed to a plethora of faiths and related traditions. From grades three to ten I attended Wisdom High International School where interfaith education was a key part of our curricular and co-curricular activities. We celebrated the main festivals of major world religions like Hinduism, Christianity, Islam, and Buddhism. A typical celebration day looked like this:  All students dressed up, usually in traditional attire. At the end of the school assembly, a student would explain the festival’s significance and how it is celebrated. During lunch or breakfast we got a dish or a snack associated with the festival. For example, for Eid celebrations we dressed up in traditional salwar kameez, listened to the story associated with it, and ate seviyan, a popular sweet eaten on Eid.

These experiences helped us to not only develop a sense of respect for other faiths, but also to learn to participate in other faith-related activities without it being controversial or politicised. In India, the most major religion is Hinduism, followed by Islam and Christianity. Our school curriculum was designed in a way that at a very early age we were introduced to these religions and some of their basic tenets. The stories we read in English and Hindi literature class had characters from different faiths coexisting harmoniously. Even at home, being respectful towards other faiths was taught to me indirectly. My neighbours back home are Christian so every Christmas they invite us over to decorate their tree and celebrate with them. We invite them over for Diwali and Ganesh Chaturthi where they actively partake by singing bhajans (songs praising Hindu deities) and performing some rituals. Being an active participant in other people’s traditions helped me develop an appreciation for diversity.

The coexistence of diverse faiths with mutual respect for each other had never been something I questioned until high school when I started learning more about religious conflicts. Moving to the US for college has made me question it even more so because the majority of adults here are private about their belief systems and less open to talking about it. This felt totally new for me, as my experience in India is that people regularly talk about religion. It was also disorienting: I felt disconnected and lost during my first semester of college because even people who practice religion don’t talk about it. Gradually, I found out ways to keep myself grounded in my faith while those around me seemed uninterested in those conversations.

Growing up, I did not understand the importance of the interfaith exposure I received from my schooling and family life. Today I value it more than ever, especially when I see hundreds being killed and thousands being discriminated against in the name of faith. If all schools in the world could do what my school did, incorporating interfaith programming into their curriculum, the world would be a slightly better place. However, simply promoting tolerance of other religions is not enough, as ‘tolerance’ comes from a place of dislike or compromise.  We ought to make people feel welcome, respected, and appreciated — not just that they are being tolerated. An environment of mutual respect and appreciation makes peaceful coexistence possible, a firm foundation for a successful society.