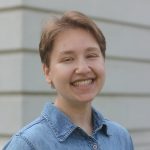 When I was little, prayer felt like a mystery I could never quite figure out. It was a ritual I experienced daily around my childhood dinner table, where my sisters and I would recite prayers as fast as we could before eating. My family prayed before going to bed, too, gathering in a room each night to sing hymns and recite the Lord’s Prayer. Sometimes before I drifted to sleep, I would wonder who had written all the words we recited, where they had come from. The prayers that occupied most of my curious attention, though, were the ones my Lutheran congregation led during church services, or the ones I would occasionally catch a glimpse of my mom or dad in the middle of. Hands together, eyes closed. The kind of prayer where you commune directly with God.

I would do those prayers too, of course – both inside our church sanctuary and at home. When I prayed alone in my bedroom with no one to posture for, though, my kindergarten mind would often wonder what I was supposed to be feeling. I would think very hard, internally narrating the things I was worried about and grateful for. Then I would pause. Was I supposed to wait for a voice to answer me back? Should I have been feeling God’s presence somehow? I would sometimes wait for a sound or a sudden breeze to indicate the presence of something supernatural. Of course, nothing ever happened. Whatever it was that my parents did while they prayed, I wasn’t in on it. There was something I was missing.

As I grew up, I began to pray much less and learn much more about Christianity. Much of that knowledge was quite worldly and practical, acquired through my family’s time in a Unitarian Universalist congregation. In lieu of a personal connection with God, I learned about how the Bible was compiled, how Christianity spread to different countries, and the history of its various sects. All of it was deeply fascinating, but none of what I learned inspired me towards faith. For me, belief began when I sought out more personal knowledge. I never asked either of my parents how to pray correctly, something my childhood self would have loved to know. As a teenager, though, I did ask my dad how he came to be a Christian, and his answer profoundly influenced my faith.

The way he put it, if he decides that he believes in “God the Father Almighty,” the way it’s written in the Apostle’s Creed, God’s omnipotence makes it impossible to truly rule out any of the creed’s later passages. Importantly, this includes all the parts I found improbable, like the stuff about Jesus being conceived by the Holy Spirit. Either God is limited, unable to make such things happen, or God is almighty, inherently capable of acting beyond human comprehension. Who are we to say how Jesus came to be? That suspension of disbelief in the name of God has taken me a long way, even though my dad’s spirituality has continued to shift since then. For me, the idea of trusting in the totality of God’s power provided a kind of basis of logic that allowed me to turn back towards prayer.

I wasn’t inspired to pray again immediately after that revelation. It took a multitude of other occurrences to lead me there – adulthood, living on my own, being apart from my family. It took intense sadness and incredible happiness; it took living during a global pandemic under late-stage capitalism. Eventually, my solidifying belief that God exists and loves the world made trying to get as close to that divinity as possible feel natural. I began to wait a few minutes before turning my lamp off to sleep each night, hoping to feel as much of God as I could. I would find my hands together, eyes closed.

Somewhat predictably, praying now is nothing like my childhood experience. I know that the God I search for isn’t a disembodied person who will answer me with a voice or a sudden breeze. God’s love for me and the rest of the world is unconditional; I don’t have to pray to earn it, and there is no correct way for me to pray. Instead, prayer is the route I use to get closer to God. It orients me towards gratitude, calm, and stillness, centering me in the middle of something vastly greater than myself. It draws me deeper into my identity as a Christian. These days, prayer still often feels like a mystery, but it is one I will happily continue to solve.

7 thoughts on “Hands Together, Eyes Closed: Circling Back to Prayer – Genevieve Grade”