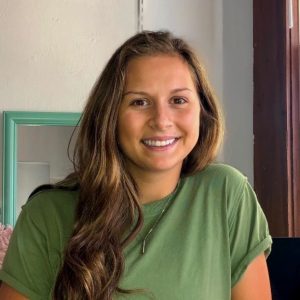 Having attended Catholic school for twelve years, prayer has always been an incredibly important part of my life. We prayed nearly every period of the day as well as in the morning before class, and once a week attended a formal service. Because of this, I fell into a rhythm and it became robotic rather than intentional. Each day, each period, it was the same methodical prayer, which at the time seemed completely normal to me. As I transitioned to college and away from the repetition of daily prayer I was accustomed to, I was able to stop and really think about how I pray and how I want to incorporate it into my daily routine.

Prayer in the Catholic view is “the raising of one’s heart and mind to God or the requesting of good things from God” (Catholic Catechism 2259). In this way, prayer acts as a two-way process of Catholics developing their spirituality and reflection while allowing God the opportunity to answer. To me, this means that our relationship is two-sided. I have been fortunate enough to have had many of my prayers answered in various ways over the years, even if it is just as simple of a signal to show He is listening. A relationship with God includes the practice of actively conversing, and for me this includes morning conversation as well as nightly. Prayer is essential in faith because it builds the personal relationship you have with God while on earth. With prayer, I am given reassurance that He is there; without prayer, our relationship would be weakened because it is like talking to someone who is not listening.

This interpretation of prayer is exactly what I needed to hear when I was relearning how to be a practicing Catholic on my own and not in the structure of school. Suddenly, I went from reciting known scripted prayers to having actual conversations with God. I found myself having conversations with him in the morning while I was having my coffee, and before bed recapping my day, allowing room to thank Him for all I have been blessed with. Instead of saying a large quantity of prayers during the day, my prayer time became less frequent but more meaningful. My relationship with Him became an active and alive relationship rather than just a role or routine practice.

As I adapted to this style, I have noticed a trend: praying in times of hardship is way easier than praying when things are going well. During my three and a half years at college, I have had many ups and downs. My freshman year was a lot of good, including a lot of rebuilding and relearning who I was and who I wanted to be. This meant that prayer came easily and naturally as, in a sense, I was relearning how to do it. Then, my sophomore year we entered a global pandemic. Life was changed in a scary and very dramatic way. Even though I am blessed to have been able to return home to my family, my life was difficult during this time. I had just broken up with a long-term boyfriend, was having major roommate  issues, and no longer knew what direction I wanted my future career to go in — all while a little understood sickness was spreading all around me. During this time, I turned to God in prayer.

Skipping ahead to the present, we’ve adapted to a new pandemic normal, & I find my life going in a more positive light. I have found an amazing group of friends, an incredible sport that I am passionate about, purpose in my future career, and I have truly learned to love and accept myself as I am. In this new place of happiness, my conversations with God are less often and more often shorter. My relationship with God, although still strong, isn’t quite the same as when I was going through more hardships. I am working towards being better because God is not just there to help you through the bad, but also there to celebrate with you through the good; it’s ultimately about my relationship with God.

My journey with prayer has changed throughout the years and is still adapting as I grow into my spiritual self. My style of prayer continues to evolve as I learn more about myself and my relationship with God. Even when prayer doesn’t necessarily feel like I am reaching God, these are times of growth where their full meaning may not be understood until later. I am thankful for the experiences I have endured and excited for the ones I will have in the future that will help fortify my connection to my faith.

2 thoughts on “Connecting to God through Prayer — Allie Kutsch”