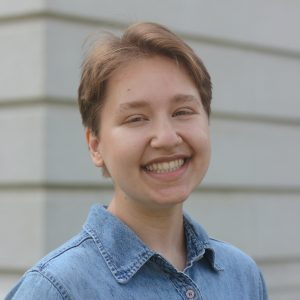 This past summer, I went on a C.S. Lewis kick. Naturally, I started by re-reading his Narnia series, and after that I put some of his religious writings on hold at the Madison public library. I would pick up one of his books after my work shift, then walk back to my house and attempt to absorb the text while swaying in my porch hammock. It was my first time seriously reading any Christian scholarship besides the Bible itself, and I fell asleep with a book open more than once. But over the course of three very hot months, I learned a great deal about the way Lewis thinks about God, and much of his writing has given me a new perspective on not only my faith, but also my personal relationship with gender.

For years, I shied away from religious explanations of human capacity for evil – the age-old question of theodicy, “why God lets bad things happen” – that cited original sin or divine punishment. Lewis’s essay “Divine Omnipotence” offers a different narrative, one much easier for me to trust in spiritually. He argues that if God intervened to prevent human destruction or harm, our world “would be one in which wrong actions were impossible, and in which, therefore, freedom of the will would be void.” In other words, God gifts humanity with self-determination, which means that our ability to dictate our lives and actions is crucial to who we are. God suffers with us when the consequences of human actions cause destruction or pain. For Him to stop them, however, would make us something other than human.

Considering human capacity for destruction as part of a gift from God isn’t exactly a cheery thought. But Lewis’s work did prompt me to consider the lighter side of God’s self-determination coin: human capacity for creation and change is also necessarily a gift from God. Instead of giving me glazed and decorated ceramic mugs, God gives me clay and tools and the ability to throw on a pottery wheel. He doesn’t cook my meals; he gives me ingredients and pots and pans. Of course, God is with me as I myself do each of these things, and He could do any one of them for me. But He doesn’t, and I believe this is because cooking and throwing pottery, writing essays and making music not only bring me great joy – they make me human.

Is this a more mundane revelation than the rejection of original sin in favor of free will? Not to me, at least not right now. As I have begun gender transition, it has instead been vital to forming a new kind of connection to God. I grew up in religious communities that were very proud to have both men and women serve as pastors and communion acolytes, which meant that the way that gender influenced religious experience was hard to define. But it was present in the women’s Bible study groups and Sunday school classes that focused on the strength and devotion of New Testament characters like the Virgin Mary and Mary Magdalene. Church sermons, too, put biblical teachings in the context of how best to live out God’s will today – often, it seemed to me, specifically as a man or woman.

Far from coming to any conclusion that the influence of gender upon religious experience is wrong or should be avoided, growing up in these congregations left me wishing for a way to access God in a similar manner, despite waning personal interest in Biblical direction on how to live as a woman. As I began to socially and physically transition, I wondered more than once why God, with all of His divine omnipotence, would ask such a thing of anyone at all instead of simply giving me a body more suited to myself. My answer now lies in framing transition as an act of creation. The happiness and spiritual fulfillment that lies within changing my body and presentation is a way I live out God’s gift of self-determination.

Of course, C.S. Lewis wrote very little about these topics. But I also read a novel last summer called Something That May Shock and Discredit You by Daniel Lavery, and I found within it a succinct way of putting my own relationship between gender and religious connection. Lavery writes that transgender people exist in the world “for the same reason God made wheat but not bread and fruit but not wine, so that humanity might share in the act of creation,”only half tongue-in-cheek. Humanity does create, just as it destroys, and both qualities are divine gifts. For me, my own hand in the formation of my body and gender has brought me closer to God.

1 thought on “On Creation: Gendered Connection to God — Genevieve Grade”