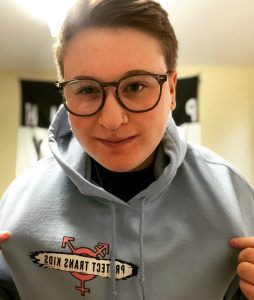 Traditionally, queer and religious identities are seen as mutually exclusive – one cannot exist alongside the other as their values are in contradiction. As a Jewish trans man, I struggled to feel whole and authentic in both of these identities. There are two valued principles in Judaism that have allowed me to validate and uphold this existence.

B’tzelem Elohim [בצלמ אלוהים] translates to: “in the image of G-d”. We are all created b’tzelem Elohim regardless of our differences. If we are in G-d’s image, then in some way, G-d must also be in our image. They must reflect our diverse identities, abilities, imperfections, and flaws. Judaism carefully and concretely refrains from depicting G-d as human-like and or in any physical form. Consequently, b’tzelem Elohim must embody the soul rather than one’s physical presence. Gender mirrors this trajectory as it is an identity that resides within someone as opposed to just on the surface.

I have transitioned socially as well as medically which has included hormone replacement therapy (HRT) and top surgery. These medical technologies have allowed me to actualize my gender identity more fully and have enabled me to live in my body more comfortably. Because G-d’s image is immaterial and spiritual, physically altering my body to match my gender identity does not obstruct or negate this image. If anything, my medical transitions have enabled a closer connection with b’tzelem Elohim.

Traditionally, bodily alterations that are not commanded by Halakhic law, or that cause unnecessary bodily harm, are frowned upon and unwelcomed in Jewish faith. Aside from circumcision, one should leave the world as they come into it. Cosmetic surgeries or permanent markings such as tattoos defy this expectation. Although utterly necessary, I feared my HRT and top surgery would in some capacity push me away from the Jewish community and religion.

However, there is another idea in Judaism, Pikuach nefesh [פקוח נפש], which translates to “preservation of life”. Saving and or preserving someone’s life takes precedence over following Halakha, Jewish law. Any Halakhic law may be broken in the event that it would save a life.

When seeking approval to receive medical trans healthcare, one must be evaluated by a multitude of professionals to determine whether not receiving treatment would have debilitating and substantial impacts on oneself. Furthermore, they determine whether such treatments would provide life changing benefits for the recipient.

I can assuredly say receiving HRT and undergoing top surgery has saved my life and provided me with pikuach nefesh.

A beautiful aspect of Judaism, and religion generally, is that it is open to interpretation. While this facet may present itself in hate speech or discrimination, it can also be used to validate individuals’ existence and lead to a greater appreciation of oneself. Values and aspects of Judaism have enabled me to feel complete in my trans and Jewish identity. There is not a singular or correct way to exist within a religion – religion can conform to fit anyone who wishes to be a part of it.