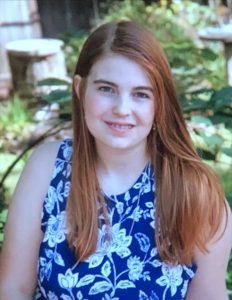 My Catholic faith has been a part of my life from a young age, as both of my parents were raised in the faith. Although they were never super devout, they made sure that my brother and I were raised in the Church: we attended Catholic school from preschool to eighth grade, we attended Mass a couple of times a month, and we were Confirmed in high school, but my parents never tried to force their religion upon us. We have always been encouraged to practice the way that feels right to us, and not to lose sight of the two most important commandments: to love God and love our neighbors.

Both of my grandmothers have heavily influenced the way I conceive of and practice my religion. My maternal grandmother died when I was eight months old. Never having known my grandmother, practicing the faith that she did helps me feel closer to her. I’ve always wanted to learn more about her, since I was the only grandchild that she got to meet. I believe that my mom also uses her religion as a way to feel closer to her mom, even twenty years after her death. My paternal grandmother and I are very close; we talk to each other on Facetime every night. She’s always been open to talking with me about my faith and although we don’t always agree, she has never devalued my opinions or tried to force me to practice a certain way.

Throughout my life, my faith in God has never been shaken. I still pray every night, and the time that I spend in prayer is one of the most relaxing and spiritually rewarding parts of my day.  My faith helped me finally overcome the depression I suffered in high school and has helped me deal with my anxiety as well. Although people often told me I wasn’t alone, I truly felt supported through my faith and through my prayers.

However, as I have gotten older I have found myself going to church less and less. At first it was simply because I was too busy, but now I no longer feel much of an inclination because I feel less and less welcome in the Catholic Church. While I agree with the Church on most matters of doctrine, like transubstantiation and the place of saints in the church, I am diametrically opposed to the stance it takes on some social issues, like the treatment of women and  the LGBTQ community, along with the increasingly political stances the Catholic church has chosen to take supporting candidates who don’t represent Christian values. I no longer feel welcome or valued in a place that claims to welcome everyone, but is really only open to people who fit the established social constructs—and even then, only as long as they are willing to fit into the social hierarchy.

I can’t help but wonder what my priest would say if I told him I felt same sex attraction. Most priests would tell me that same sex relationships are sinful and would want me to live my life in a way that feels inauthentic and would ultimately drive me away from God. I’ve seen LGBT Catholics on an online forum struggling with denying their feelings, talking about how upset they feel when their feelings don’t go away, as well as the resentment and depression that develop because they aren’t able to live the same kind of life that their peers do. While I can’t imagine that God really wants anyone to be miserable, it shows just how unwelcoming the Church can actually be. I’ve found that if I can’t live authentically in the Church, then I don’t really want to be a part of it.

While there are still enough doctrinal issues to tie me to Catholicism, I have expanded the scope of my practice to explore more about Christianity and other faith cultures. I strive to find a community where I can worship authentically and I don’t have to think about hiding pieces of who I am whenever I attend Mass. Reading further into Christianity and the difference between denominations has also influenced my own feelings on my faith: instead of just listening to what the priest or one edition of the Bible says, I’ve been forced to forge my own path and rediscover my faith on my own terms. This has ultimately brought me closer to God, as I have chosen how to worship him instead of simply following my family. I look forward to seeing where my faith journey continues to lead.