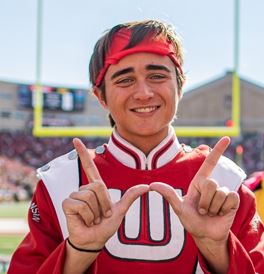 Being raised in a small community where religion was not overtly discussed, I grew up imagining that I was neither religious nor spiritual in any way. However, I’ve come to find out over the course of my life that I grew up with values and a moral code that form their own kind of faith, even if it didn’t come from any specific person, place, or text.

‘Spiritual but not religious’ is a difficult position to occupy and, I think at least, requires mental hurdles to justify in my own mind, without believing in some idea more concrete and established. But if I believed in the people around me and our cooperative ability to build something worthwhile through sustained effort, such as a community — does that count as spiritual? I couldn’t honestly say for a long time.

The necessary change to induce a wider viewpoint came in moving to Madison, a roughly 260,000 person increase in population compared to my hometown. Meeting a range of people from expansive backgrounds, I came to find that against intuition, these people shared many of the same beliefs, values, and ethical ideals as I did, even without the same community.

Finding this wider net of people who I could see myself in only redoubled my belief that people are a part of a design bigger than themselves. The question still remained though, what exactly was I purporting to believe in? Believing in people themselves so far as their pure physical existence is hardly a groundbreaking sentiment as nearly any person on the planet could confirm their existence. Believing in people is all the thought I ever put into the thought, but with time to reflect, I’ve come to realize what exactly I actually do believe in.

I’ve found my own faith in people and their individual lives. As each person takes up their personal quest to uphold the traditions shared so communally without acknowledgment, so many people leading such varied lives come together to form something no one person could ever see. Our traditions vary considerably in physical practice, but lead to a similar endpoint.

As I sat thinking of what I was attempting to describe, I was shocked to find myself describing faith in some shared human experience. This is the faith I hold, even as I declared to be outside of faith their entire life.

I don’t pretend to be anywhere near the end of this exploration into my own beliefs, but in widening my net from a town comprised mainly of gravel roads to a capital city with an assortment of more people than I could ever hope to meet, I continue to find the reassurance that this belief I inexplicably hold isn’t misplaced. Far from it, I’m beginning to see my faith in the people I am lucky enough to find all around me.